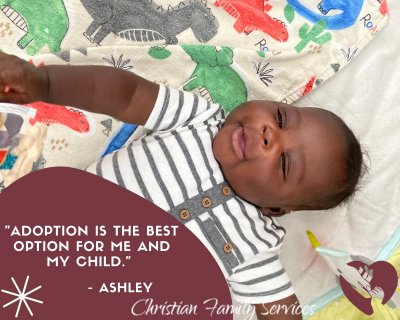 CFS received a call from a hospital social worker at Shands in Gainesville. She was with a mom who had just given birth and wanted information about adoption. We were on speakerphone so that this new mom could hear us. She didn’t have any specific questions, just wanted to know “how it works.” Caseworker Jasmine gave her a general overview of adoption, stressing that a lot of it depends on what she wants it to look like. This mom then agreed to meet in person, so Jerry and Jasmine drove to the hospital to meet her in her room.

When Jasmine and Jerry arrived, this mom was on the phone and smiling. We introduced ourselves, and learned her name was Ashley*. When asked what she knew about adoption, she said she didn’t really know anything. Jerry then told her all about adoption, the possibilities of communicating with the adoptive family, CFS, adoptive family qualifications to adopt and ongoing, lifetime support for her. Ashley said her biggest worry was her son, “B”, going to a loving, Christian family.

They talked with Ashley and learned more about her and her current circumstances. She’d been thinking about adoption for several months, while continuing to weigh her options. She’d even looked up agencies and knew since then she wanted to use CFS. Like many women we work with, especially in the midst of the Covid-19 Pandemic, she was hesitant to call us while she was pregnant. She also thought she had more time, but B was born prematurely and would be in the NICU for the next several weeks.

After talking for a while and answering all her questions, Ashley said adoption is definitely something she wants to proceed with, and she signed the initial paperwork.

When Jasmine returned to Shands the next day, she answered more of Ashley’s questions. They also talked about what sort of characteristics and communication she’d want with the adoptive family, should she choose adoption.

Ashley said she believes adoption is the best decision for her and her son, but needs more time to think about everything before making a decision. She was especially worried about this because she was being discharged today. Ashley was reminded that she could take all the time she needed, and nothing will happen without her say so.

Before leaving, she said she wanted to see adoptive family profiles soon, hoping that would help her make her decision. She made a plan to call CFS when she was ready to meet again.

Ashley called Jasmine the next day stating she was ready to meet again and look at adoptive family profiles. Before showing her profiles, however, they talked for nearly an hour about her options, pros & cons, fears and worries.

CFS never wants a mom to regret her decision, so Jasmine wanted to be sure no question was left unanswered.

It was then Jasmine learned her biggest fear was the adoptive family wouldn’t love him the same way she does. They spent a long time discussing that, until Ashley said she felt a sense of peace, and was ready to choose a family.

There were two families she really liked. She looked at both of their books several times, asking lots of questions. She was having a hard time deciding between the two, and made a comment about “feeling bad” for the family she didn’t choose. Jasmine reminded her she has nothing to feel bad about. It’s about her, her child and who she believes is the best fit. She then told Ashley that even though it will be hard, when she looks at these two families, which of them can she picture her son growing up in? Ashley was tearful, but answered with no hesitation. Once it settled in, she looked through their book one more time, saying she felt she had her answer and felt much better.

Jasmine then asked Ashley if she wanted to proceed with the adoption paperwork today, or wait until later. Ashley said she wanted to do it today. She also wanted to meet the adoptive family today and see B again.

Before Ashley signed the Adoption Consents, Jerry asked if there was anything he or anyone else could say to make her change her mind. Ashley responded, “No. Adoption is the best option for me and my child.”

After finishing the paperwork, Jasmine took Ashley back to the hospital to see her son again. She spent about 30 minutes alone with him before she was ready to go. They then went back to CFS to meet the adoptive family she’d chosen. Understandably, Ashley was excited but nervous.

They visited for about an hour getting to know one another. The “S” family told Ashley they plan to keep the name she had chosen, which made her really happy. They asked about holiday meals and traditions she wanted to pass on, and she told them a few of her favorites, promising recipes later on. They also talked about how to care for B’s skin and hair. Ashley said they would have to wait until it grows out to see what the texture will be like, but that they can ask for help with it anytime.

Before everyone left, we took pictures of them all together.

It was important to Ashley and the S family for B to have pictures of his two families with one another.

Ashley continues to have an Open Adoption plan with the S family. She receives regular pictures and letter updates directly from them. She sends them regular letters as well. Since they are a biracial family, she even sent children’s book recommendations about biracial families, different black leaders throughout history and more. The S family already reads these books to B and their other son.

Things haven’t always been easy for Ashley since she placed B for adoption. However, with time, continued support through CFS and regular meetings and communication with Jasmine, Ashley says she now feels a lot better. While it’s still hard, she still believes she made the right decision for her and her kids.

When asked recently about her experience with CFS, Ashley had this to say:

CFS was very supportive and helpful in guiding me through the process of finding my son’s forever home & family and I couldn’t be more grateful! The process can get emotional and some days may be harder than others but I’m thankful for the parents God led me to choose because they’re the most loving and genuine couple I know and I’m glad to have been able to be a blessing to their family.

Ashley also told CFS she is open to being a “mentor” to other women. If you’re considering placing your child for adoption, but want a birth mom to talk to first, call CFS, and we can get you in touch with Ashley.