You are here: Home › Blog › God chooses the family for the child
By Donna Booker on December 26, 2019 in Newsletters

We hear a lot about babies and children being “chosen for adoption.” There is no question that the adoptive parents have played a decisive role in bringing about this beautiful picture of one being “chosen.” But who is actually doing the “choosing?”

Once we received a call about a baby that had been born at 26 weeks and who was still in NICU. After understanding what the birth mother and grandmother were looking for in an adoptive family, I was convinced that we could find a family easily enough.

Initially 16 different families came forward interested in adopting. As more and more medical information became available regarding her status and potential future issues, that list ultimately dropped to five. Upon closer scrutiny, none of the families seemed appropriate.

How was I going to place this precious baby in a forever family if I couldn’t find the “right” family for her? But then, God “chose” a church in that area to step up. They had staff and volunteers take turns being with her, holding, feeding, and talking to her every day. This had a tremendous impact on the staff.

But the major issue was still the same, where was I going to find her new family? Then, God did what He always does, He stepped up, in His timing, and produced another family, out of the blue, that had never been a part of the original batch. The family that He had “chosen,” that He had known from the beginning was the “right” family, was presented to me. I felt His prompting the minute I began talking to them about this precious little girl. When they all met in the NICU at the hospital, there was absolutely no doubt, no question in my mind, or anyone else’s that this was not only the “right” family, but also God’s “choice,” a special gift to this precious baby!

So, back to my original question, “who does the choosing?” I believe it is actually God and not man who has already decided which family He wants a baby raised in. I believe that He chooses the right parents to be open and to be chosen by the right birth mother to raise and nurture the child that He has a special plan for.

Might YOU also be a part of His special plan? Maybe He is warming your heart to the idea of adoption. Maybe you already have adopted. Does He now want you to “pay it forward” and be a blessing as you have been blessed? Is He wanting YOU to play a special role in supporting a ministry where moms of His “chosen children” are accepted, counseled, encouraged, loved on, and supported while they make the difficult choice of the “chosen family” for their child. However you feel called, please don’t ignore it.

Please consider sending a “special” year-end gift before midnight on the 31st.

Copy and paste in your browser to donate now: 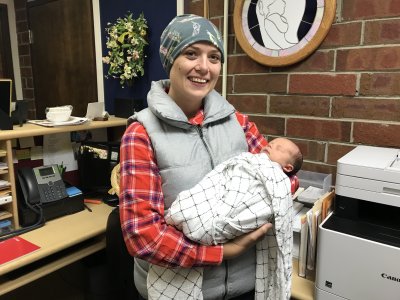 P.S. Your gift will also provide help to cover for one of our key caseworkers (26), who is currently out undergoing Chemo and surgery for breast cancer.