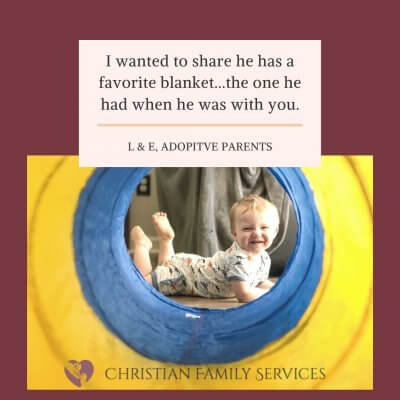 Considering an Open or Semi-Open Adoption in Florida? As a potential Birth Parent, do you wonder what sort of information you’ll get from regular updates?

As a prospective Adoptive Parent, are you asking yourself what you should write about in your letter to your child’s birth parent? It’s the little things. It’s the milestones. It’s their developing personality.

We hope this letter from an Adoption in Gainesville gives both parties an idea of what to expect:

This boy is getting so big and growing so fast! He now has 6 teeth (and I’m pretty sure at least a few more are on their way), and he’s eating just about all the things haha. He still has a bit of an aversion to eggs, but he LOVES a good peanut butter sandwich, chicken nuggets, honey nut cheerios, and just about anything with spaghetti sauce on it. He’s also taken a liking to standing in the doorway of the fridge and eating grapes out of the bag and pulling the mustard and lemon juice containers out of the door. He also recently learned the sign for “more” and has been great with using it while he’s eating.

His birthday was a lot of fun. We were able to get together with some family and have a little dinosaur-themed party. He loved having all the attention and being able to open his gifts (this kid LOVES tissue paper). When it came time for his smash cake, he was very tentative about it at first and was just kind of checking it out; we eventually put his hand in it and he was slowly getting into it, but he really got going when we gave him a fork! He’s got a minor sweet tooth, so he loved having a little cake all to himself.

Most importantly, this guy is walking all over the place now! He took his first steps on July 13th and in 6 weeks I would say he has gotten up to walking about 75% of the time inside the house. He is not really feeling the idea of wearing shoes (though he does like to try and put them on by himself) but we are working on that. I’m pretty sure he’s gotten so good at walking because he spends a large amount of time kicking the side of his crip while he’s settling down to sleep at night haha. He is a crazy fast learner and has already figured out how to open the baby gates that E built for our stairs, but at least he hasn’t tried to go upstairs without us (he hasn’t quite gotten the idea of how to open the top one from the inside yet so we’re safe there). He gets up and down the stairs fairly quickly now and he’s very cautious about his movements to that effect.

He is so curious about the world and to gain new skills and experience different things, it’s amazing how much he has figured out already and his zeal to learn is incredible. He has been more open to letting us read books to him and likes to pick on out for us to look at most days. He can identify his ears, hair, tongue, belly, toes, and nose (though he usually doesn’t point to his nose, he’ll pretend he’s a pig and do a sniffing/snort sound).

He usually listens pretty well and will clean up his toys and other things when he’s told. We have a Swiller mop and he is obsessed with it! We had one that stopped working so Ethan took it apart and made it into a smaller version, and now G pretends to mop the floor on the daily haha. Cooking and house projects are some of our regular activities that he has really taken an interest in – he figured out how to work E’s power drill and wants to help with anything that we’re doing. He’s gotten into playing on E’s computer and his electric drum kit and also enjoys getting into a basket full of craft supplies that we have in our office.

He has started doing a bit of coloring as well; he has been very interested in the white crayon in the box for some reason haha. I also got him a bin filled with pompom balls that he has been freaking out about; he loves to use a kitchen spoon to throw them all over the floor haha.

I wanted to share that he does have a favorite blanket, and I’m pretty sure it is one that he had when he was with you (it’s a blue blanket with a dog in the corner). He has to have it to go to sleep and if he doesn’t then he never sleeps as soundly. I think it’s really special that he’s so attached to it 🙂